I used to attend business exhibitions in London. Thanks to the mayor  (Sadiq Khan) and his TfL tax on visitors I avoid going to any exhibition located in the Ultra Low Emission Zone (ULEZ) of London.  As his need for funding grows he expands the ULEZ to put more vehicles in scope, trying to justify it on health grounds.

Visiting London is expensive. The railway train fares are prohibitively expensive (£226 return advance booking + £13 tube) for travel during business hours. Car travel used to be an alternative, but the combination of increased fuel cost, car parking fees, Congestion Charge and TfL taxes make it less of an option.

Staying overnight in a hotel on an exhibition day currently is around £350 per night with advance booking.

The exhibition companies are fighting to regain attendees after the Covid-19 lockdowns. In London they fight against the inconvenience and tide of rising travel costs. For a 2 day trip by train from Derby to a large exhibition in London you are looking at around £600 - £700 including basic food.

Posted by Orchardman at 10:55 No comments:

I knew I had a free afternoon, so I signed up to a paid webinar. As in paid, I mean that I paid 20 GBP/hour to attend. The topic was of interest to me, and I'm happy to support the hosting organisation. It is a telecommunications industry body representing the smaller companies who install broadband networks for the public. The speakers and other participants were company executives and directors, consultants, senior Civil Servants involved in telecoms and regulations.

After at least one year of Covid Lockdown, you'd think these people would know the basics of participating in webinars from home offices and also organisation premises. Not a chance!  There were loads of basic mistakes and it was obvious there'd been no rehearsals by the speakers. They'd all appeared to have assumed it would work okay on the day.

The webinar software worked well with all the usual features, we even had virtual networking "tables" outside the main virtual conference "hall".

However there were lots of fundamental mistakes from the participants:

These people knew their industry well, but the unprofessional approach seriously degraded the impact of the web conference.
Posted by Orchardman at 18:54 No comments:

We found our Epson 7110 Workforce Inkjet was dead and beyond economic repair, so we looked around for a replacement device. We settled on the Epson SureColor P700 printer. It was pricy to get on the road, but we like it a lot, however it was not all plain sailing. We had a battle to sort out the Extended Warranty.
Now, it is just a regular part of the business.
The story is here in this YouTube clip:
Posted by Orchardman at 18:46 No comments:

In these days of fast internet connections and cloud based network and servers, you'd think that no manufacturer of commercial and retail software would have a poor download speed for upgrades and new purchases. We have a 120 mbps link to our business and around 20 ms latency. It is used daily for video conference, VOIP phones and other online applications. All of our servers are "in the cloud". We know that we have good connectivity.

We've noticed that one application does not seem to make use of our fast internet link. That product is the Cyberlink Application Manager. The software is used by Cyberlink to keep our versions of Cyberlink Director video editing software up to date. Downloading the latest version takes well in excess of one hour. When you start the application to update software, you think it is hanging or locked up. We've worked out it is actually working, but very slowly.  The program files are not massive, about 1 gigabyte, but we've learned to start the application and to leave it running.

It is almost as if Cyberlink has a software distribution server designed by an accountant. Perhaps an old IBM PC-XT on as 5 mbps data link to service all of its customers. As long as you are very patient, the process works.

This is not a one off problem. We've noticed it for the past few months.

Posted by Orchardman at 18:03 No comments:

Improved cleaning at the cottage

We're planning to reopen the Holiday Cottage in September 2020 if the Covid-19 situation permits. We'll need to be able to quickly clean the cottage during turnround between guests. We've already purchased an ultraviolet lamp for general room sterilization, but we also need to have a method to clean surfaces as an integral part of the safety processes.

Those involved in the cleaning work will need to wear protective personal equipment, such as disposable gloves, mask and disposable apron when undertaking the cleaning. So the process we've decided to follow is to first irradiate a room with Ultraviolet-C light for 15 minutes. This will destroy any airborne or surface laying virus particles. We'll then move the UV-C lamp to another room, while  using high pressure superheated steam to clean high touch hard surfaces and soft furnishings in the first room. This sequence will be followed through each room in the cottage.

We'll be using a Dupray steam cleaning kit to undertake the steam cleaning, thus avoiding the use of chemicals for sterilization. Our guests will not have to be exposed to residual chemicals during their stay. The superheated steam cleaning is also effective at cleaning greasy kitchen areas.
Posted by Orchardman at 15:46 No comments:

Safe use of ultraviolet (UV-C) to sterilize small business premises

Using UV-C light to sterilize the rooms of the business, as part of a cleaning programme between business sessions has its advantages. It doesn't leave a chemical residue and doesn't increase humidity.  The process is quite fast, depending on the power of the ultraviolet lamp deployed. However it is not without risk to the operators of the lamp. There are fairly strict EU and USA regulations relating to the health and safety exposure limits for ultraviolet lamps. During use you need to wear protective clothing and goggles/face shields to avoid exposure to the light.

This is the ultraviolet lamp that we use for the sterilization process, it is 72 watt 230 VAC: 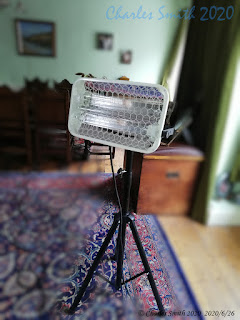 At a distance of 5cm, the ultraviolet light intensity of the lamp we use is around 17 milliwatts per square centimetre. This would exceed the daily safe allowance within a minute if exposed directly to the UV-V light output from our lamp. The further you are away from the lamp the intensity starts to decrease quite rapidly. The shape of the lamp reflector affects how the intensity of UV-C is distributed. Reflection from surfaces can also increase the indirect exposure.  As part of the safety procedures the operator should not be in the room when the UV-C lamp is switched on, unless fully protected by UV-C PPE gear. UV-C can be stopped by fairly light protective gear, but you need to keep it away from bare skin and the eyes. The light kills virus/bacteria by damaging the DNA/RNA within the organism. You don't need your own DNA being damaged.

However it is likely that situations will arise when you need to measure the intensity of the UV-C light to make sure you do not exceed the safe limits of exposure. We purchased a specialist UV-C meter to perform these measurement and to also test the safety level of any PPE equipment that we wear. You cannot detect UV-C light by your normal senses. We test UV-C radiation levels before, during and at the end of a sterilisation session. We also document those levels. We also record our tests on PPE equipment. 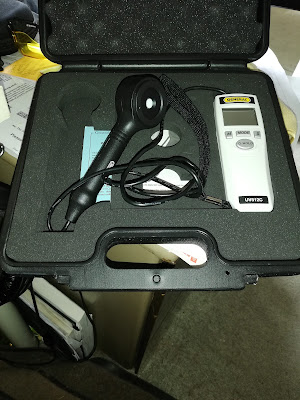 We purchased a laboratory quality meter. It is a General Instruments UV512C meter.  We purchased it via Cole Parmer in the UK. The following link will lead to the Philips Lighting  advice on using UV-C for disinfection. We also use it at our holiday cottages.
Posted by Orchardman at 14:19 No comments:

Purely by chance I saw a reference on-line to the BICSI document on best practices for Data Centre Design and implementation.  I had a quick look on their website and was intrigued by the document. So I took a deep breath, opened my card wallet, and purchased an electronic version of their document. At $525  (USD) it is no lightweight purchase, but I think a fair investment if you are in that line of business.    Mistakes made in the early design processes of a Data Centre can be very very expensive to fix at a later stage in the project. At the very least this document gives a good checklist of things to consider. It also usefully refers to other appropriate standards.

My line of business is more in the area of Trading Floors and their associated technology rooms, but much of the Data Centre best practices are useful to keep in mind.

I'm about 25% through the first read of this document. It is delivered in an encrypted pdf format which you need a code to activate the document. One side effect is you cannot use adobe comments to annotate individual pages. Nor can you print from the document, and while it is understandable from the publisher's viewpoint it is a pain in the butt.

It is obviously written by people exposed to the USA management style of data centers. In the accommodation section most of the technical and security areas are described, but no mention is made of canteen or recreational facilities for the operations and engineering staff. Believe it or not people are an important part of a datacenter and their welfare is important.

Posted by Orchardman at 13:33 No comments: